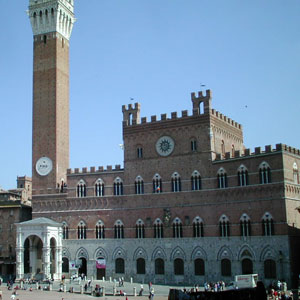 ‹ ›
Duration: 10 Hours
Scale: 1 - 8 people
From: Firenze
Tour size: 8
To: Firenze
Categories: City Wine Tours
Languages:
Transportations: Car
A wine tour that can suite the most demanding in terms of wine and style. A visit to Siena and all the other attractions in the wine region of Montalcino. Included: Private car, wine testing, Guided wine cellar tour, driver assistance.

A wine tour that can suite the most demanding people in terms of wine and style. A visit to Siena to see the Dome, Piazza del Campo and all the other attractions in the wine region of Montalcino. Probably the most known wine and one of the godnesses you can find in Tuscany, a visit to a famous yet not well-known winery to taste the original Brunello di Montalcino and to see how it is produced.

Situated on a hill and developed around an ancient fortress, Montalcino immediately fascinates its visitors.Small gastronomy shops, narrow streets and the reality of this small country had inspired the genuineness and dedication of the people who had created and produced what probably is the best Italian wine. Brunello di Montalcino. 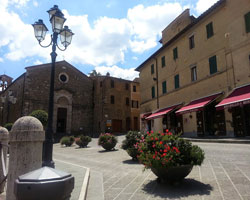 The history of this village started with the first Etruscans' allocations during the Hellenistic period and it continued with the construction of defensive fortress in the VI century ac as well as with various building works taken place to defend the village. However, it was abandoned and left to ruin until approximately the III century ac.The first written document about Montalcino is dated 715dc and is signed by the King of the Lombards. It regulates a dispute Bishops regarding the property of some churches. In the 815dc other documents told us about the Montalcino's territory donation to the Abbey of Saint Antimo, which, according to the legend, was funded by Charlemagne in 781dc. 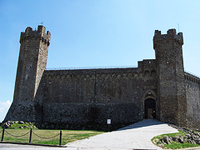 Later, in the Renaissance, there were some disputes going on between Senesi and Florentines. After the taking of Siena by the Florentines in 1555 Siena people became refugees where they were protected by the walls of Montalcino. Refugees of the war established the Siena Republic which was legitimate until 1559.Later in that year the territory was annexed to the Grand Duchy of Tuscany and controlled by the Florentines.In addition to the ancient walls, gates and Montalcino's towers one can admire the Town Hall, the churches of St. Francis and St. Augustine having examples of Senesi painting school, the Cathedral, the archades and much more. You can indulge yourself in an atmosphere of calmness and peace of mind experiencing the walk of life - marked by the seasons and the production of the famous Brunello di Montalcino wine which is the great attraction of the place.The area that surrounds the country is what gives the name to the famous wine, and here, you can find many wine cellars to visit and many wine tasting events to go to - from the most famous producers as Biondi Santi to small cellars.You will be given a real opportunity to taste this Tuscan treasure directly from small farms and to get in touch with the producers of this precious wine directly from the source.

In this city the vicissitudes of fearless knights can be relived: you seem to catch a glimpse of them in the characteristic alleyways that give Siena its proud and elegant aspect. 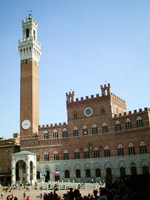 The shell-shaped Piazza del Campo, where the historical Palio is held, involving all of the cities districts, is one of the most important Italian Mediaeval stages. Its nine grey stone sectors are a melody of volumes and spaces, harmonised in the fifteenth century by the Fonte Gaia: a rectangular fountain basin made by Jacopo della Quercia.

The Palazzo Pubblico, seat of the town hall, articulated in rooms frescoed by Tuscan artists houses the civic museum where it is possible among other things to admire the wonderful "sala del mappamondo" and the famous Maestà by Simone Martini or the just as famous Guidoriccio Da Fogliano, by Martini. 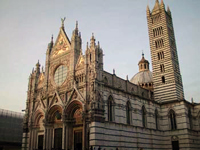 The Duomo, however, is an architectonic document completed in the last quarter of the thirteenth century by Giovanni di Cecco.

The "Storie di Maria" carried out by Duccio di Buoninsegna in1288 are housed in its glass windows.

They are the most important Italian example of this type of work, enhanced by the sculptures by Bernini, and by the Tomb of Cardinal Petroni. Finally, the Torre del Mangia, an architectonic wonder built by the Perugian brothers Muccio and Francesco da Rinaldo that epitomises the Middle Ages is represented in all of its greatness and elegance by Siena; a city of ancient traditions.