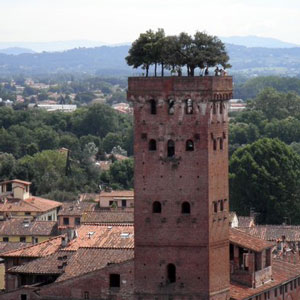 Pisa,  city of medieval walls surrounding a historic centre rich in monuments and works of art of extraordinary value. 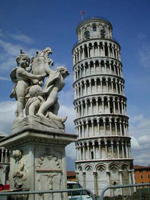 Pisa is the origen uncertain, according to the history was established for the Focesi (VI b.C), some other information says that was the Etruscan. It was true that Pisa became a very important Port during the Imperial and continuos its develop as trade activity.

At the beginning of the 1000, Pisa was a powerful Maritime. It rises close to the Tirrenian sea, Corsica and Sardinia. Furthermore, could boast of many victories against the Muslim ships.

Oriented towards Ghibelline politics, Pisa was the only free Commune in all of Tuscany to openly support the Swabian sovereigns (Frederick I Barbarossa, Henry VI, Frederick II, Manfredi and Corradino) and were thus in contrast with the Papacy.

Also it was excommunicated in 1241 for having captured and consigned to the Emperor Frederick II. 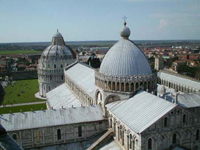 The gradual decline of the city was decreed by its rival Genoa with the defeat of Meloria in 1284 and subsequently also by Florence. The loss of Sardinia and predominance over the sea placed Pisa in a kind of isolation from which it only emerged around 1500.

Pisa is not just the tower, is also a strongly city, characterised by enviroment treasures, first its Marina, a tourist place established during the years of Belle' Poque and Liberty.

Secondly, the Park of San Rossore, with its homonymous estate.

All this, and much more, mades Pisa a wonderful and unique city in the vast panorama of the so called art cities, and it offers tourist and visitors an infinite selection of attractions, from historic-artistic ones to holidays. 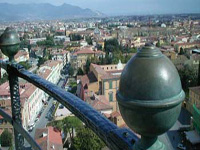 The tower was designed to be "vertical", but started to incline during its construction, which began in the august of 1173 and continued for about two hundred years.

The architect is still uncertain.

Even if it did not lean it would still be one of the most remarkable bell towers in Europe.

The present tower has been the object of very special attention and since the 1173 thanks to its beauty, during its construction efforts were made to halt the incipient inclination through the use of special construction devices.

Some of the later colums and other damaged parts were changed in more than one occasion.

Nowadays, interventions are being carried out in order to significantly reduce the inclination and to make sure that the Tower will have a long life.

Lucca is an ancient city with Roman origins (it became a Latin colony in 180 BC). It still maintains the urban structure and the remains of the first fortifications and the amphitheater.

Lucca is known as "the city of the hundred churches".

A countless number have been preserved and some are deconsecrated. They can be found both inside the famous walls that surround the city, which was fortified to protect the city from attacks in the Middle Ages, and also in the neighboring areas. 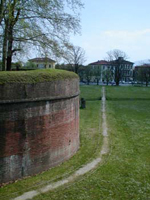 The center of Lucca is scattered with well preserved Middle Age palazzos, among which the most ancient European State Mint, established in 650 AD. Places worth a visit are the Church of San Michele in Foro, the Church of San Giovanni, Reparata and surely the Cathedral of San Martino whose chapel was built by Matteo Civitali which houses the sculpture of the Volto Santo. 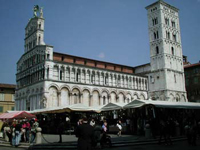 The Torre Guinigi is high 44 and has a characteristic that makes it unique; a wonderful Holm oak planted on its summit.

It is very romantic to take a walk or rent a bike and ride along the ancient walls that have been transformed into a park and enjoy the splendid landscape of the city and its many bell towers that are silhouetted against the horizon.

Was once a defensive fortification but that still preserves the charm of maintaining intact the center of a wonderful Medieval city.